Giant Step Onto The Seventh Continent

In my head, I heard the music from 2010 a space odyssey as I finally stepped onto the Antarctic continent.

Brown’s Bluff is a tuya on the northeast side of the Tabarin  peninsula jutting out of the top of the Antarctic Continent. ‘Tuya’ is today’s fun word for the day. Here from Wiki is the definition: “a distinctive, flat-topped steep-sided volcano formed when lava erupts through a thick glacier or ice sheet. They are somewhat rare worldwide….” Gracias Wikipedia!

When there’s a glacier, the lava bursting through can’t travel far, building up to form tall cliffs. There are all kinds of yummy volcano things happening here: Basalt, volcanic pillows, and rock bombs standing on the beach like sentinels.

We had a wild zodiac cruise (please don’t ask me to repeat this part of the trip) before landing and climbing up to see a couple of precious snow petrels sitting on nests under a huge boulder.

Adele penguins and their babies crowded the lower slope. It’s interesting to see the overall psychology of penguins on each landing. Some groups are fairly quiet with occasional trumpeting and squawking. This crowded beach was one for anger management counselors and perhaps jail. Adult penguins would harass babies with their mothers. Other birds ran around, carelessly pushing and jumping over others. Fights broke out with two or three chasing each other up and down the slopes.

My heart felt sad for one Adele parent. That poor bird tried over, and over again, to pick that big egg up in it’s  small beak. Each time  she tried a rescue attempt, the bloody thing rolled downhill even more. I watched as the adult shifted around, studying the situation, but unable to correct the problem.

Gentoo penguins are also on this beach in large numbers. Big fluffy babies waddled about after their parents, begging for more and more food.

The Adele babies (below left) are just so darn cute but check out weird penguin tongues on the Gentoo!

That hook with backward barbs is perfect for snagging slippery krill or other fish. In the meantime, on this active beach, penguins continually march to the sea in groups. 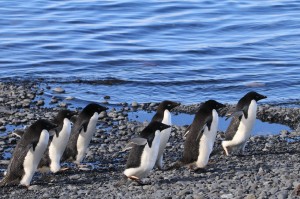 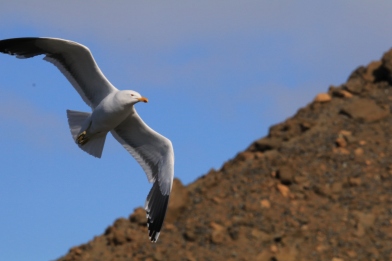 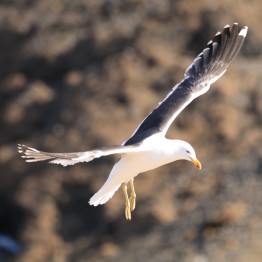 One thought on “Giant Step Onto The Seventh Continent”