There’s a new Grand Egyptian Museum being built in Cairo that’s supposed to open in 2021. It will be wonderful to have the worlds largest collection of Egyptology moved from the cramped old building in Tahir square. The bigger space will allow artifacts held in dusty storage to finally see the light of day. Here are some highlights:

The first pharaoh to unite upper and lower Egypt was Menes (3,000 B.C) and he was a master at political spin and fake news. This carved stone is very important because it sells his story. On the one side he wears the crown of the south. On the other he wears the crown of the north. The captives with their heads cut off and placed between their legs is a mighty incentive to keep lips zipped. This is the first time there’s a united crown that looks like a bucket and a champagne bottle with a cobra on it. the gods at this time were animals and birds and predates hieroglyphics.

The positions of the stone carved royalty tell a story. Left leg forward means the pharaoh was alive at that time. Legs together means the leader is eternal=dead. All together there were 30 dynasties and seven of them were led by women including the great Nefertiti ( the most beautiful and dearly loved by Akhenaten) and ending with Cleopatra. Statues show children in miniature or behind their parents. Pharaohs and royalty did find eternity by carving effigies that we can see today. Imagine entering a dark tomb with a torch and seeing their eyes glow from crushed malachite and gem stones painted around the eyes!

The mummy room is a must, even though it costs extra. Bring cash. These are the most important rulers in Egypt, including Ramses 11 (the great). He took the throne in his teens and ruled until his death in his nineties.

There’s an extensive collection from the murdered Tutankhamun’s tomb. I can’t imagine how exciting it must have been to find three nested gold burial boxes and the many treasures in his intact tomb. King Tut’s mummy isn’t here though. You’ll see him later in the Valley of the Kings.

The Pyramids at Giza

In my last post I told you about the naughty boy Khufu. He is the one who built these monuments over 4,500 years ago. At 780′ by 480′ tall it was the largest man-made edifice for over 4,000 years. There are so many mysteries about the largest pyramids in Egypt. They are perfectly aligned with the compass points. How did they hand cut 2 1/2 million stones with simple metal tools? Work only occurred during the rainy season when the immense blocks could be moved by barges from the quarry. Because of the weight, only one stone was on each boat. Let’s look at the math. It would take 20 years to build if a stone was placed every 4 minutes and workers were on site. Impossible?

Khufu’s reconstructed funeral boat (43 meters or 141′) is in a building across from the pyramids. It was sailed once in the funeral procession and then taken apart for him to use in the afterlife.

There are more monuments than the great pyramid. The smallest of the three pyramids was for Khufu’s grandson and his mother, Hetepheres. There are other royal tombs surrounding the pyramids. It’s now believed that the water worn Sphinx is much older from a time when Egypt was more wet.

The Babylonian Fortress was built during the 6th century BC some say by the Roman’s while others believe it was constructed by King Nebuchadnezzar, King of Babylon after he captured Egypt. It sat on the border between Lower and Middle Egypt on the Nile.

Inside the fortress is a Greek Orthodox church (St. George) and the Hanging Church built on top of the southern gatehouse of the fortress. From the outside it appears to be hanging in mid-air. The main altar and the sanctuary are made of ebony and inlaid with ivory. The timber ceiling is beautiful and was made to look like the interior of Noah’s ark.

There is an older church below this one where the baby Jesus slept in a cradle and Mary hid. I’m not sure how this time line worked since it would have been a Roman garrison back then. Regardless, It’s a serene and much earlier Christian church in Egypt.

Ben Ezra is also near the fortress and it’s still a Jewish Temple so pictures cannot be taken inside. It is believed that this is where the Pharaoh’s daughter found baby Moses in the reed basket. 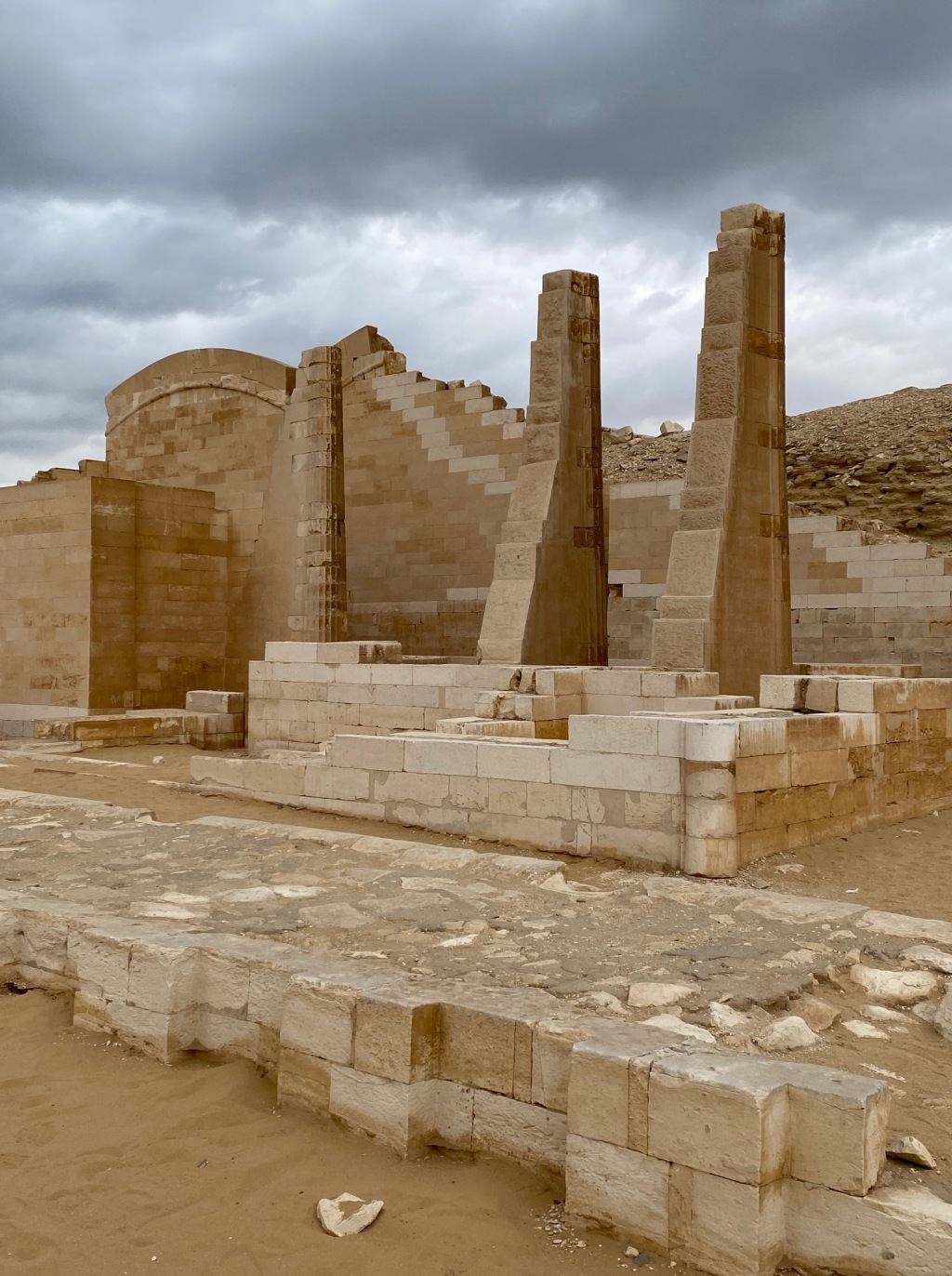 My first dreams of Egypt began at my grandmother’s home where my monthly ritual of reading National Geographic Magazine began. There I was–a seven-year-old curled up in an overstuffed chair with my bobby socked feet curled under my Catholic school uniform as I learned about chasing the sun to grasp eternal life. Although the thought of having my brains picked out of my nose during the mummy process gave me pause.

Now older and not necessarily wiser, I searched the risks verses rewards which included negative perceptions in the States about Egypt. My clock keeps ticking and I was done waiting for the perfect time to see these mystic wonders and astounding artifacts. All of us live in an imperfect world. Holding my breath, I clicked the purchase this trip button with Overseas Adventure Travel. Then I went to a book store to purchase The Yacoubian Building by Alaa Al Aswany.(amazing look at Egyptian culture and the revolution.)

Since we flew in a day early, Bonnye and I booked a driver through the concierge service to take us to the Red Pyramid and Bent Pyramid at the royal necropolis of Dahshur and to the burial city of Saqqara. It was a fascinating drive, even though our driver got lost and we passed military carrying AK-47’s. Luckily, none of them saw Bonnye taking this picture or else we might still be in jail. ( I highly recommend NOT taking pictures of military anywhere in the world)

This early transitional pyramid is bent because good ol’ Pharaoh Sneferu couldn’t quite figure out the geometry in his quest for a smooth limestone tomb. See the bend half way up? Before the fourth dynasty, all pyramids were step-shaped. This was Sneferu’s second attempt for a geometric tomb after the disaster of the sinking Black Pyramid that is also in Dahshur. The change in angle might also have happened if the building started to become unstable.

It was a kick to walk (and crawl) through the steep shaft down to the two large corbelled chambers built 4,600 years ago. Let me add that there were few people visiting that day, which was great. Imagine being inside the belly of a pyramid with people moving in both directions. It would be impossible with crowds. The added benefit was being able to feel like a real archeologist discovering an empty tomb. The Bent was closed for 50 years because of a nearby army camp so it was an honor to be able to explore.

*** on a side note–if ticket takers offer to take your picture, you are expected to pay them!!!***

It took Sneferu three times to figure out the right angle for his tomb in Dahshur. The Red limestone pyramid is the first success as well as the third largest such edifice in Egypt. (His son went on to build the largest–more on that later). It was covered in white Tura limestone but people in Cairo took the blocks for their own buildings. It’s thought that the man known as “the good pharaoh” was buried in the three chambered Red Pyramid. A mummy was found there but it disappeared. Keep an eye out for it on ebay.

There have been recent finds from a queen’s tomb nearby and there are at least 11 other tombs that haven’t been explored yet.

Nearby the Dashur pyramids is the city of the dead for royalty and merchants from the ancient city of Memphis. It covers an area of 4.3 miles by 0.9 and was surrounded by a 32 foot wall. There are some burials from the second dynasty but It all went crazy with the third dynasty step-pyramid (of Djoser). Everyone wanted to spend eternity with the rock-star king’s so it expanded with an entry courtyard, a court of 40 columns, open courtyards and many smaller tombs called mastabas. Rituals and burials happened here for 3,000 years.

I found several tombs to be very interesting. Idut was the daughter of King Teti (6th dynasty, circa 2,360 B.C.) Her tomb shows every day life with hunters, fishermen, and even a relief of herself carved on the wall. Head west to Inefert’s tomb. He was the prince Vizier and on the walls is a carving of them entering a bedroom with two beds that servants are preparing. The other tomb we tripped on by accident as it’s away from the main complex. Maya, the treasurer of Tutankhamun has beautiful carved walls.

***Be prepared—there are men at the main entrance who act like they’re going to show you around. At first I thought it was included in the entry to the UNESCO World Heritage site. But I quickly figured out that they wanted to be paid. I stopped the man rushing us down the entry hallway and said, “I don’t want a guide. I won’t pay you!” He continued to follow and tried to show us things. I told him at least 3 more times that I wouldn’t pay him before he got snippy and made comments about “you’re rich from America.” I had to raise my voice to get him to leave us alone. It happened again at Maya’s tomb. I again warned the man who ended up cursing me. We were so frustrated we didn’t finish looking at the tombs in that direction. I’m certain that if we had a man with us this would have been handled quickly and quietly.***