In early 1960, a seven-year-old girl with a bowl-shaped haircut sank into her grandmother’s overstuffed chair. Following ritual, she grabbed a National Geographic Magazine, drawing her bobby socked feet up under the skirt of her Catholic school uniform. Before the girl opened the first page, her grandma placed an afghan across her lap. She was now ready for transport to exotic lands and alluring cultures. The wing chairs and floral wallpaper disappeared as she saw herself entering Angkor Wat, in a far-away place named Cambodia.

I am that child. Flash forward to 2018. Filled with excitement to be seeing the deserted city for the first time, I arrived armed with childhood memories. When I was young, I thought the Khmer Empire complex might be as large as my three-storied elementary school. Later, I reassessed. Maybe it would be huge, like my high school. Nothing prepared me for the actual size–ninety-six square miles of many temples, royal cities, villages, and hydraulically engineered moats that grew two or three crops of rice per year to feed the large population.

As my feet traversed the path traveled by an ancient, mighty culture, I reflected on images in my mind and felt unprepared for the complexity of the portraits and buildings carved from stone. Monkeys played in the brush or sat on motorcycles parked at the entrance.

I closed my eyes and took a moment to transport back in time, imagining the sounds of monks chanting, horns blowing, drums banging and dancers performing rituals.

Angkor Wat is a UNESCO treasure, but not the only jewel discovered in the jungle by French archeologists in 1914. There are over seventy archeological monuments representing different Kings from the 10th-13th centuries. Looking into the woods, I saw remains awaiting excavation.

We visited Banteay Srei, Angkor Wat, Angkor Thom and Ta Prohm. Each fortress, city, or monastery is distinct from the other.

Banteay Srei (citadel of women), established in 967, wasn’t built by a Khmer king but by Yajnavaraha, a scholar and philanthropist who helped those who suffered from illness, injustice, or poverty. If I could time travel, we might have been friends. The name of this temple relates to numerous, beautiful red stone carvings.

Some of the effigies are of dancing women. Many carved panels tell moral stories or ancient battles. Treasures have been stolen over the years. Phallic stones are missing. 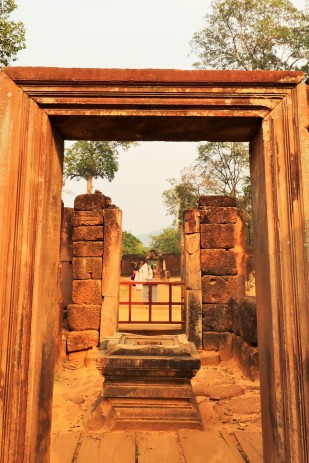 A fellow tourist told me that when he first came here, it wasn’t safe to wander around the site as many land mines remained from the Pol Pot years of terror (1975-1979). Our guide told us that over 2,000 mines were removed. Approaching the temple on foot, I watched a young monk dressed in orange sitting under a tree. He was checking his cell phone for messages.

This would have been very different from the life of a monk from long ago living in bare simplicity. His brother from long ago would have endured similar teachings but the need to interact with modern technology seems a long way from balanced karma.

When I was younger, I didn’t know that the word wat meant a Buddhist temple or vata from Sanskrit meaning ‘enclosure’. The full name means temple city and is built in a pyramid form to represent the sacred mountain, Meru. The five towers represent the peaks. It’s a visual reminder of the spiritual universe built by King Juryavarman 11 from 1113-1150, and is set inside a 570’ moat on about 500 acres. 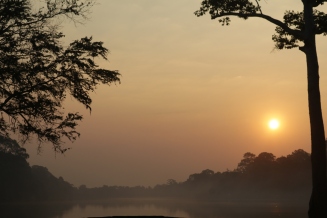 There’s so much acreage but even sunrise is filled with hordes of people. These places would have been busy centuries ago as well, but with merchants selling wares and pilgrims carrying expensive gifts for the King or priests. Redemption carries a big price, then and now.

Getting into the complex structure is a challenge. The original steps are very narrow and steep, requiring the climbers to bend forward in submission and humility. Today, equally steep wood stairs at least offer a handhold for the faint of heart.

The temple is a series of rectangular sections with dark corridors leading to bright sunlit courtyards. Light and dark. Ying and Yang. Balance.

The carvings in the long hallways depict battle stories, similar to Helen of Troy, but Cambodian style. Another hall shows 37 heavens and 32 hells with terrible punishment for sinners. There are depictions carved in stone of long ago battles. Rounding another corner, I was impressed with a creation story. 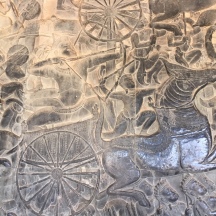 There are small, very dark temples to Buddha spread throughout the sanctuary and it’s believed that Angkor may have been dedicated for the King’s funeral. I didn’t have my usual peaceful feeling, but rather felt fear and decay. 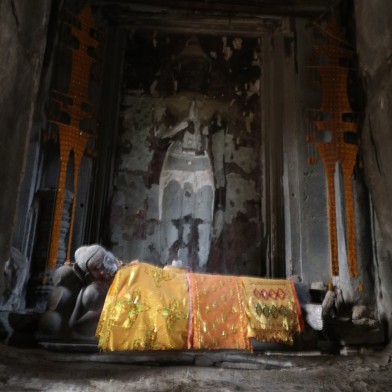 Honoring Buddhea today in another section

Leaving the darkness, I walked to the outer wall, admiring life-sized voluptuous dancers, cut from unyielding stone with diaphanous movement shown in wispy clothing. Some of the dancer’s breasts were destroyed, shot off by Pol Pot soldiers who occupied the site in the 1970’s.Those men had no regard for their ancient heritage or respect for women. 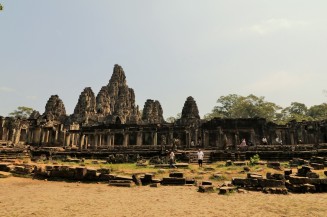 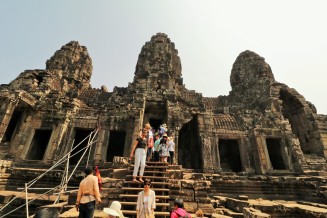 Angkor Thom means great city, of the late 12th century by the magnanimous King Jayavarman V11. To enter, one must cross a causeway over a moat bordered by 54 stone figures. Demons are on the right and guardians on the left in reverse ideology. 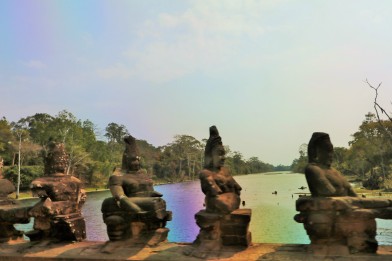 Being left-handed, I appreciate the opposite thought. The city gate remains, and is large enough for elephants to pass through, but a tight squeeze for modern tour buses.

What I enjoyed about this place and this particular king was his love for common people. The carvings on the outer walls are dedicated to his subjects and show everyday life. There are people cooking, selling things and dancers. There are carvings dedicated to a midwife and women in labor that I especially appreciate because I was an L+D nurse. There are images of soldiers marching with spears, others are packed into boats, and one section shows the enemy being eaten by alligators.

Inside the sanctuary are pyramid-shaped buildings connected by narrow walkways. Certainly there are many more people visiting today than would have been allowed in the ancient past.

It’s hard to get photos without many multi-cultural faces jostling into you. Regardless, the immense faces carved in stone are majestic.

Is this a guardian of the past or an image of the king who commissioned this city?

Ta Prohm means monastery of the King and was constructed in the late 12th century to early 13th by the very same civic-minded Jayavarman V11 who built Angkor Thom. This was a Buddhist monastery and university built in a flat style rather than the earlier pyramid shape. Once upon a time, 18 high priests, 615 dancers and plenty of wealth flowed into this center and the surrounding village of 80,000 people. It would have been a bustling place for prayer, training, and study. 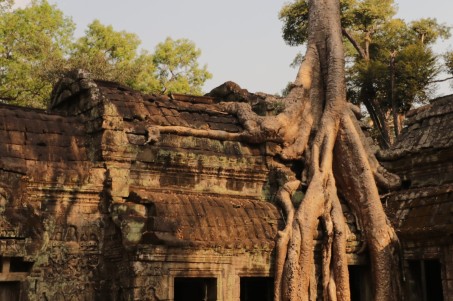 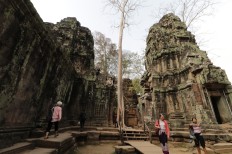 Archeologists decided this complex should retain the feeling of emergence from the jungle.This is the temple used in the Tomb Raider movies for the sense of discovery and adventure. Trees grow over sections of ancient walls. Stones have fallen down and are toppled about, looking like dice thrown by giants.

Everywhere there is a sense of being the first person to set eyes upon a place of great mystery. Being the most visited archeological site in Cambodia, I suggest going either early or late in the day when it may be possible to get a few photos without crowds.

We sat across the moat, looking at Angkor Wat while we ate (and enjoyed) jerky strips of water buffalo, frog legs, and snake meat washed down with local beer. Being open to immersion in another culture awakens the senses—touch, hearing, smell, taste and sight. The little girl who dreamed of travel and the adult I became united in a heartfelt moment at the golden hour. The sun slipped below the horizon and I realized that I must go back. Cambodia is a land of great history, amazing archeological sites and beautiful people.