Are you lost? Check out this map .

We started in the Northeast of Georgia at Right whale Bay, followed by Salisbury Plain, Leith and Stomness whaling stations, and onward to Grytviken. Sailing down the coast, this stop is Saint Andrews Bay with the next submission from Gold Harbour. The final visits will be Drygalski Fjord and Cape Disappointment.

Our Quark Expedition itinerary states: “Thirty years ago, Cook Glacier terminated at the high water mark on the beach in a spectacular 30 meter (98 feet) high, 500 meter (546.8 yard) long ice cliff.” With recession and melting, we now see distinct glacier toes of Grace and Lucas glaciers between soaring ice-scraped rock. Saint Andrews Bay has the largest colony of King Penguins in the world (up to 500,000) and vast numbers of Elephant Seals. On this cloudy day, rougher waves made photography a challenge. 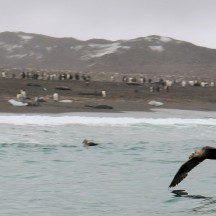 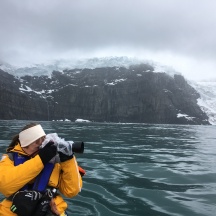 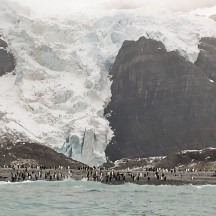 Imagine walking through a wide glacial plain, approached by the wildlife. The roar of sparring elephant seals echoes like distant thunder. There are so many animals and birds that I turn in circles, eyes and mouth open in wonder.

Only the “weaners” (weaned young and some adolescents) remain on the beach this late December day.

Bull Seals are 13-16 feet long and weigh 4,500-8,000 pounds. These “beachmasters” left for a solitary ocean life as soon as mating was finished. Not good dads. The cows, a svelte 1,500 pounds and 10 ft long, only feed the pups for 28 days, during which time the youngsters gain over 300 pounds. Then they slink away, leaving too. Tough love at its finest. 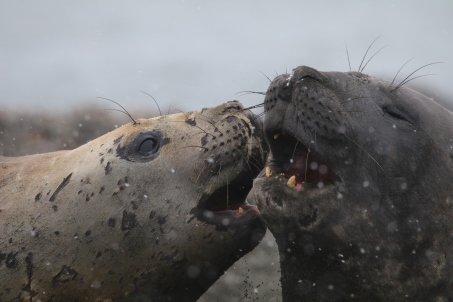 Ten percent of (mostly male) weaners figure out how to steal milk, and become double-mother sucklers. They sneak in,  quietly push younger pups away until they are discovered.  The interlopers are promptly bitten, chased away and forced to live in juvenile pods where they nestle together for heat.

The weaners won’t leave the beach until after they molt— and hey—it gets chilly when skin  sheds, so thermokinesis is essential. This process can take two months and result in substantial weight loss, but it’s also when these hunky babes learn to swim. 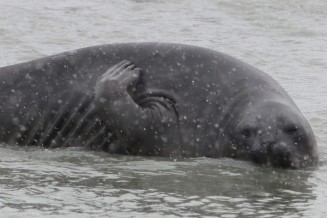 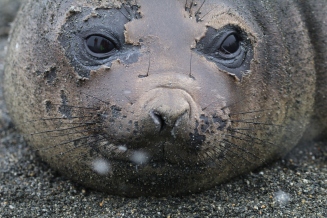 Both males and females enjoy head-banging and pushing each other around. Mock fighting does involve biting and injuries do happen.

I got sucked into the mesmerizing vortex of watching these (second largest) colorful penguins.

They don’t build nests. Both parents take turns holding the egg on their feet, hidden under fur and nestled against bare skin. Average Kings weigh 33 pounds, average height is three feet. They raise two chicks every three years. Leopard Seals are the biggest predators ( more on them later) and Skuas eat unattended eggs or chicks.

“wooly” or “oakum”( named after caulking in old sailing ships) penguins appear larger than mature Kings. Once upon a time, researchers thought they were a separate breed, but they are juvenile Kings that haven’t molted yet. These guys relentlessly beg to be fed, but the parents have evasive maneuvers worthy of  Super Bowl contenders. 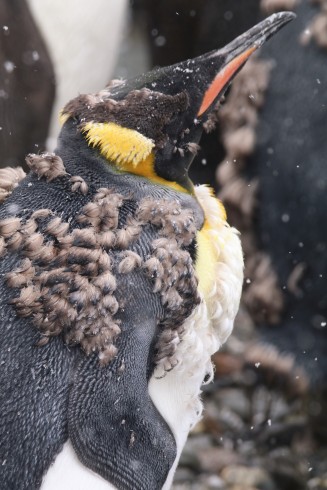 called Wooly Or Oakum at this stage

Once the juveniles get their plumage, they are waterproof and can fish for themselves. Molting makes them look like steam-punk rock stars, but behavior indicates a miserable process.

At St. Andrew’s, many weaners and King penguins aren’t afraid to approach. If you put down gear, they will climb on it. If you stand in one place too long, they will climb on top of your boots. They seem curious, checking us out. One of my friends thought a weaner tried to kiss her. I said, “Nope. It’s a test to see if you’ll lay down and breastfeed.”

Other critters on the beach: Fur seals above. Below: Petrals and Vladimir with a group of us reflected in his ski goggles (couldn’t resist). An amazing place to be, folks! Quite an honor.