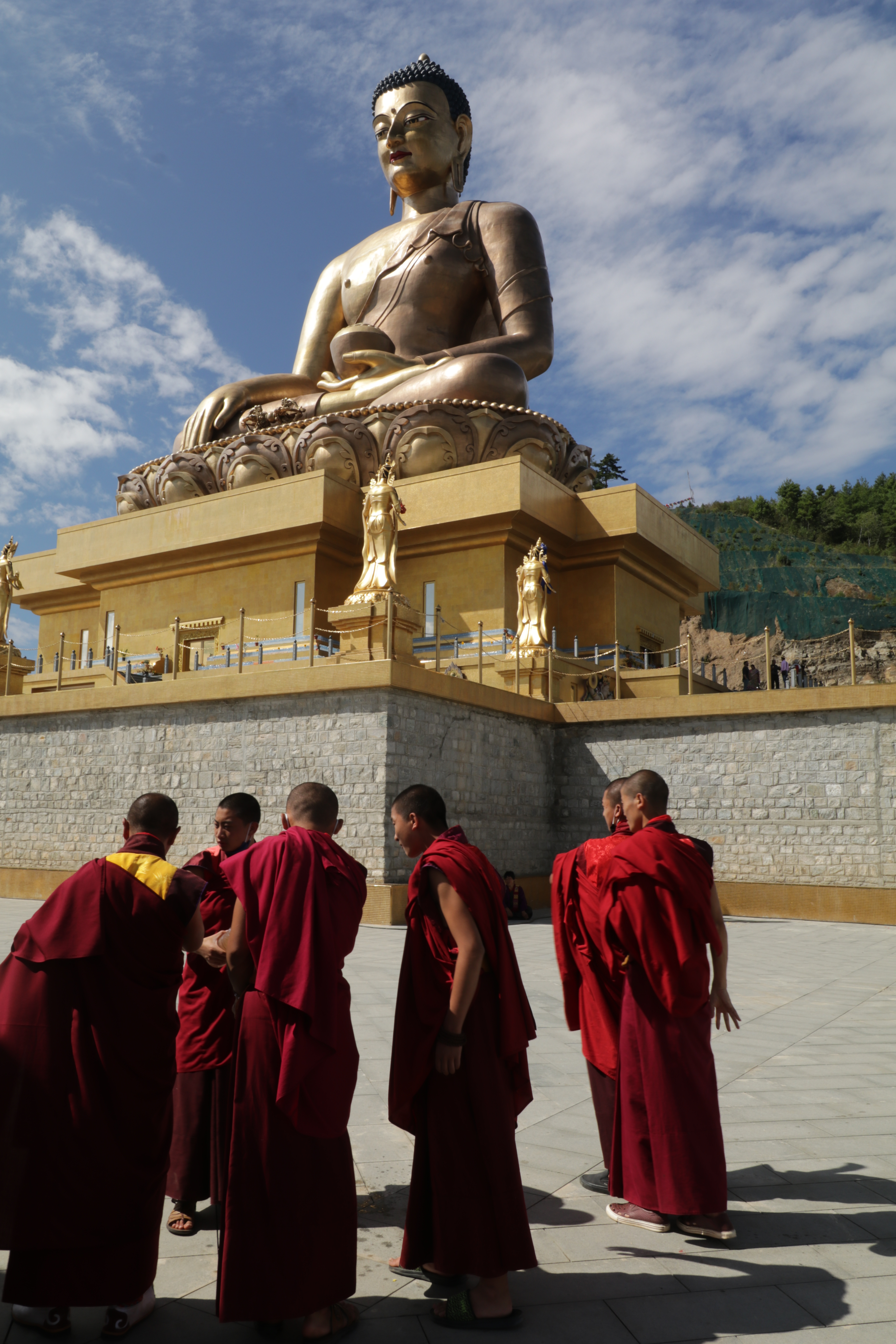 If faith in your religion brings happiness, then Bhutan has reached nirvana.

On a high hill overlooking Thimpu, an immense Buddhea, called Puensal Phodrang, glows in the sunlight This multi-storied, 169 foot bronze statue covered in gold is the fullfillment of an ancient prophecy from the year 800 and was commisioned for the  King’s father’s 60th birthday.

This seated Buddha grounds his fingers to the earth signifying the moment He transcended. He also holds a medicine bowl and before him sits the lightning bolt, a vehicle to greater transcendence. 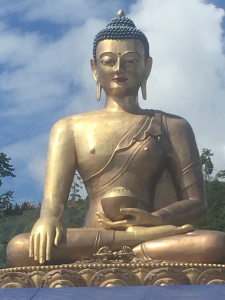 There is a temple below and inside the ediface containing 125,000 smaller statues of Buddha in infinite lines. In a center alcove, another statue of Buddhea is surrounded by larger-than-life angelic helpers. (In respect, cameras are not allowed inside.)

All of this is impresive, but I was so lucky to visit during a festival with a great Lama leading continuous prayer, 24 hours a day, for over three months. It’s estimated that 10,000 people are present each day (many sleep in temporary tarp tents scattered around the site). Monks circulate through the crowd, passing out donated nourishment.

Meanwhile, inside the temple below the statue, another group of monks repaired the disentigrating paper in old books while others hand-wrote new pages. A senior priest sat with a computer, I’m guessing he was quality control offering vigilent inspection of each page.

I chuckled as younger monks pulled cell phones out of their red robes and I wondered who sent them a vibrating message. Mom ? Brother ? Lover ? This action was secrative, as a circulating senior admonished those caught slacking off the task.

What impressed me the most was the palpable belief and trust from the thousands of worshippers inside the tent. People of all ages were intent in worship, except for a few young children who amused themselves.

Prayer tent provides relief from the sun and rain

bowing in prayer before approaching the prayer tent

Other interests diverted this boys attention

below the temple, prayer flags flutter. Among them blue tarped tents provide temporary shelter for those spending the night, week, or months.

I’ve introduced you to the archeologist who unearthed Perge and I’ve shown you the statues found. How about seeing what has been excavated to date? Although the city was started by the Hittites 1,300 years BC, the cities peak was 2nd C. AD. And I was occupied until silt from the river destroyed the harbor and the people moved to Anatalya. Think about this— the homes had running water, toilets,and a sewer system. An artificial water system filled fountains with waterfalls through windows he Main Street. See each picture for more details.
Loading Comments...
%d bloggers like this: