Cierva Cove is a serious glacial area on the Western side of Graham Land, up near the top of the Antarctic Peninsula.  Under a  brilliant blue sky, flat-topped tabular icebergs floated in Hughes bay.

We zodiac cruised around them, pressing forward into thick brash ice that popped and crackled as air trapped millennia ago released from the melting pieces. Imagine, what animal exhaled that air last, now being freed into the atmosphere again.

Forging our way, bouncing over and around ice chunks, I easily imagined what it might feel like to get trapped like adventurous explorers a century ago.

Coming around a flat berg, I held my breath passing a sleeping Leopard Seal with a blood-smeared mouth.

With reports of them attacking zodiac boats, I hoped it didn’t decide to wake up and jump at us. Other seals live and breed in colonies. These guys are loners, eating other seals and penguins along with krill and fish. The shape of the head looks rather reptilian rather than the cute seals doing tricks at Sea World.

We laughed with delight when a Minke whale surfaced, blowing a geyser of water sky-high. Minke’s are the second smallest of the baleen whales. (S)he stayed around us, feeding for quite a while. A clue this is a Minke is both the blowhole and fin showing at the same time at the water’s edge. 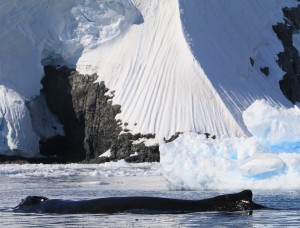 Immense bergs floated around us, caved off nearby glaciers. Ice jumbled in odd shapes while every surface sparkled under the sun.

Weddell seals laid on ice, sunbathing and lazy on this summer day in Antarctica. 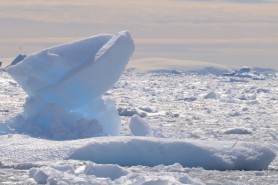 Coming around this amazing iceberg, we were surprised by a swimming Leopard Seal. Although this is the third we’d seen on this trip, this was the first in the water, emphasizing such agility and  speed.  I’m glad no one fell in the water.

The last picture is Primavera, the Argentinian summer station. They waved at us, and probably got a kick out of those brave (?) souls who participated in the polar plunge while chinstrap penguins looked on, shaking their heads in disbelief. 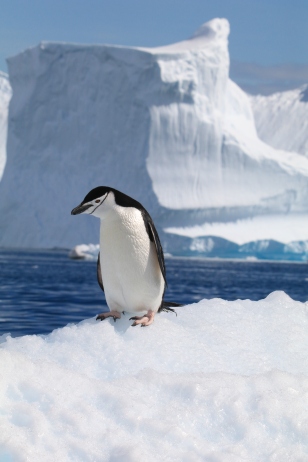