Every Country slips to the dark side when a leader can’t see how the chess move plays out down the line. Innocent families get killed over misconceived notions.  Violence escalates and the land becomes embattled in civil war.

From 1989-2004, Bhutan entered into a time of terror. With large Nepali and East Indian populations, the Bhutanese feared for survival of cultural and political control.  The King, (k-4, father of the current King) mobilized the army and police for removal of all Nepali and Indian illegal aliens. Many of these supposed squatters were third generation, born in Bhutan, with no other homeland.

Over 80,000 people were rounded up and forced to sign papers stating that they renounced their land. they were warned to leave and to never return. It’s interesting to note that India helped Bhutan at the southern border by grabbing the refugees and plunking them into Nepal. India didn’t want this problem in their country.

Nepal refused to allow the displaced families work visas and the United Nations stepped in to open seven refugee camps.

Back in Bhutan, a dress code was entered into law. Everyone must wear Bhutanese traditional clothing and speak Drukpas. Teaching languages (other than English) in school was eliminated. The King was dilligently removing diversity.

Of course, there was resistance, which turned from peaceful demonstrations to full-out terrorist attacks.  Bombings occurred in the capital, Thimbu. The government retaliated with physical and mental abuse. People disappeared and the mystery remains.  Online I found a list from a refuge camp of 52 names presumed dead, but the real numbers are not known two decades later. Details are buried in time and the land taken isn’t available any longer (per the prime minister).

Flash back to 2003 when the south of Bhutan faced Indian separatist groups who set up heavily armed terrorist camps filled with guerilla soldiers.  Negotiations were attempted, but fell apart. By January 3, 2004 over thirty camps were “eliminated”. Those who live by the sword, truly died by the sword.

World news at the time focused on Afghanistan, Iran and Iraq  where ethnic cleansing rivaled Adolf Hitler.  This allowed King Wangchuck secrecy for a time. But we are all held accountable at the end of the day.

With mounting questions, Father King abdicated at the young age of 50 and placed his 29 year-old son (Jigme Wangchuck) on the throne in 2006. It was a brilliant move to end the discussion. Junior was educated in the United States and England with a firm foundation of democracy and an astute understanding of the political playing field. Luckily, he is adored by his people and respected by other world leaders. Approximately 25% of the population in Bhutan today is of other ethnic groups, but they all must comply with the cultural rules or suffer shunning. They have no identity of their own. 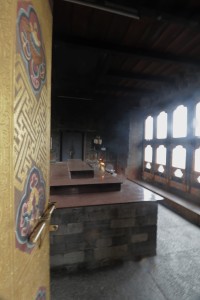 One of the four Mother Queens commissioned 108 Holy Stupas to be built at the top of 10,000 foot Dachula Pass. This number is auspicious, and dedicated to all who died in the conflicts. This often foggy, moody place also has a beautiful temple on the highest spot. 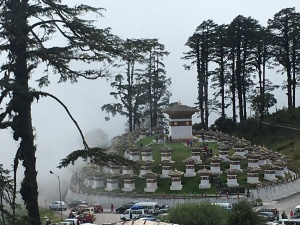 In the meantime, over 60,000 refugees in the Nepal camps have been relocated to the United States, Britain, Australia, the Netherlands, Norway, Canada, Denmark, and New Zealand. Although there is never a good excuse for force against another, I hope these survivors now face a better life with greater opportunities. I pray for their peace, unending happiness and prosperity.

Outrage over injustice must be aimed at any country doing harm to any ethnic group. When I was in Bhutan the begining of October, the Tibet border was closed by the Chinese as thier removal of native Buddhists continues and incoming Chinese citizens take their land. Refugee camps in Nepal are overflowing.

Back in the United States, President Trump is recommending similar measures that King Wangchuck enacted with removal of  illegal aliens who have children and grandchildren born here. Supremacy and ethnic purity is not what this country teethed on.  I’m hopeful he learns about Bhutan’s lesson, because our population of immigrants–legal or not– have far reaching consequences. A similar event in the US would make Bhutan look like a cake walk.

Namaste. Let me greet the goodness within you.