Take the high road or the low, you won’t be disappointed exploring Ireland’s trekking paradise. Crest green hills for amazing vistas, be enchanted in fairyland bogs, and invigorate your soul along wild Atlantic cliff trails. Join me for a walk in the Aran Isle of Inis Mor. Next, take the ferry from Aran to Doolin to walk the cliffs of Moher. From Tralee, we’ll trek part of Saint Brendon’s (512-530A.D.) pilgrim route called the Kerry Camino on the Dingle Peninsula. In the next post–part 2–we’ll explore Ballinskellig for beautiful beach trails and high vistas before exploring Valencia Island.

This Aran island looks small, but it’s packed with ancient remains from the Iron age and early Christianity. We wanted time to experience everything in one day and still have time to hike. So we booked a local tour to see the seven churches, the location of an ancient university where Roman boys died at school and were buried in these flat tombs. The 11th century high cross marks the grave of Abbott Thomas 8th/9th century.

Graves of the 7 Roman sudents who died at this ancient university. To have so many die—was it plague? smallpox? flu? 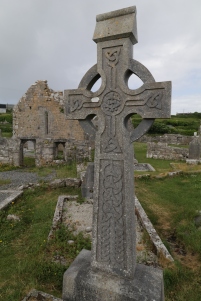 Abbott Thomas’s 8th/9th century high cross–Did he die at the same time as the Roman boys + the cross placed later? The sign not only delcares he was Abbott but also Apostle (AP)

ruins of church and graveyard

only 2 churches, although this is called the 7 churches. Constructed 8th-13th century

From there we explored impressive Dun Aonghasa, an immense stone fort built-in 1100 B.C., on a cliff  300’ above the sea. The small museum is very informative.

The fort is at the cliff edge

Walking up the path to the Iron age fort 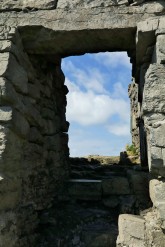 Later, the driver dropped us off at the trailhead for the Black Fort on the SW side of the island. The trek:  from above Cockle Strand, walk west along a cobbled path lined with beautiful dry stacked stone walls, all the way to the far edge of the island. 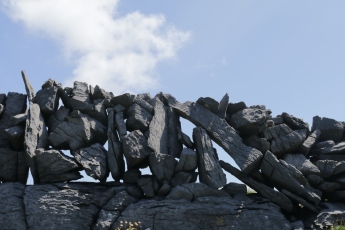 Rock wall. How does it stay up? 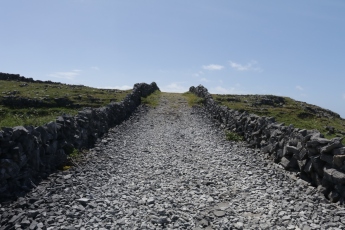 path to the west end and the black fort 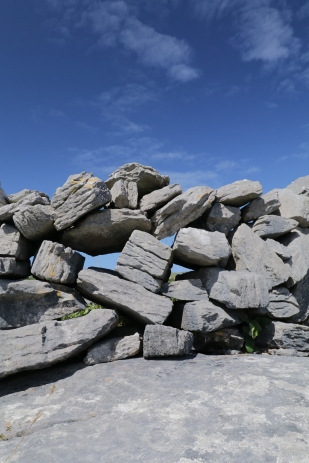 At the bench marking the trail, you’ll turn left and start crossing the fields, trying to stay close to the cliff edge and the sea. It takes time, because the fields are rocky. There are stone walls all over and you have to search for an opening between the walls or a place where it’s easy to step across. 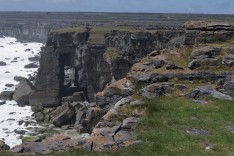 To be honest, we weren’t sure we were headed in the right direction, because there aren’t any trail markers. But the views were incredible and the weather grande. Finally, the black fort wall appeared ahead. Perseverance paid off, because we had the Iron-age ruin to ourselves while waves thundered against the cliff wall below.

Our first glimpse of the Iron age black fort 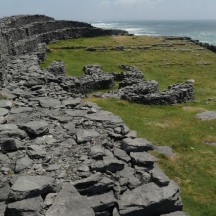 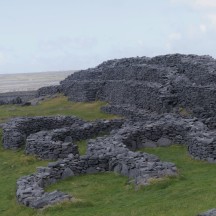 Clear shot of remains of clove-shaped dwellings inside the fort

Expect to walk about 2 hours roundtrip back to the town of Kilronan. A three-day visit would have been better to explore this interesting island as we missed a lot. Who wouldn’t want to return to see a wormhole?

The entire walk is 14 km, starting from Doolin and ending at Hags Head in the south.

Cliffs of Moher, not to far from the visitor center in the middle of the walk

There’s a visitor center with an entry fee in the middle. Some people walk from Doolin to the visitor center and take a shuttle back or walk from Hags Head and do the same thing in reverse. Next time, I’d stay in Doolin for the music festival and then arrange for Sean (info below) to pick me up at the end and transfer to lands beyond. It’s important to note that the trail is narrow in spots and dangerous on a windy or rainy day. Nearby the cliffs is an odd place called Saint Bridget’s well. 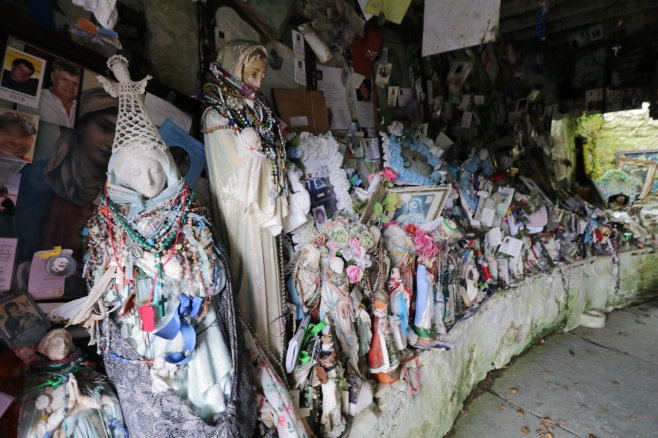 Statues, notes, and rosarys are left with hopes of petitions granted.

It used to be a pagan spot before Christianity when St Bridget took over as the patron saint of women. *If you are following my route and arriving from the Aran Islands by ferry, contact Sean at burrentours@gmail.com for a shuttle ride down to Tralee to begin the Kerry Camino.

Kerry Camino aka: The Dingle Way

This camino begins and ends at St. Johns church in Tralee. We spent the first night at the Grand Hotel on Denny Street https://www.grandhoteltralee.com/  I highly recommend the central location, nice restaurant, and fun pub with live music. Instead of walking like a pilgrim, we booked a one week vacation rental at beautiful Inch beach as a central spot to access trailheads. This required a rental car,  but there are some public transport and semi-private shuttle options. Check with delightful Eighlts at  e:dinglesleaheadtours@gmail.com. She dragged (rescued?) us out of a pub in Ballyferriter after we got stranded.

Living at beautiful Inch beach was worth every second of that week and I wouldn’t change a thing, even though we created a hybrid  pilg-acation, rather than a traditional camino. The light, colors, and clouds are mesmerizing and delightful. After trekking, none of us could resist putting our shoes back on and wandering up and down the beach. 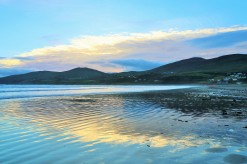 Several of our team members looked carefully at the camino route, adjusting for a minimum of road walking. The asphalt is very narrow as large tour buses whip past. Tall hedges lining the roadways prevent a safe place to step away. At times it was dangerous. You’ll also notice that we did a few legs in reverse. Assessing the views while walking, I think this was the best way to photograph these segments.

* Day 1, 8.11 miles—Biennerville, from the 1800’s windmill to Camp (avoid 3 miles walking from busy Tralee). The journey starts along an undulating and more rural road. Follow the pilgrim signs uphill to a pathway. Encounter stepping-stones crossing over a wet area, but soon you’ll hop-scotch over boggy ground. Waterproof boots, pants, or gaitors are a must. Thankfully, there are several narrow bridges over rushing streams. Be sure to close gates behind you as you meander past sheep. Once you’re in the middle of the trail, signposts are difficult to see, which is irritating. I felt psychologically tired and not too keen about this segment. Like childbirth–time eases all hardship.

More places to visit on Dingle:

Fitzgerald’s Minard Castle, circa 16th century, is on the Kerry Camino route but we ran short of time and drove there instead. It was destroyed by Oliver Cromwell after first blowing Walter Huseey and his men into smithereens.

Oratory of Gallarus, circa 700-800 A.D. This is off the camino route but you can hike or drive there. The word “Gallarus” in Gaelic is thought to mean “house of foreigners”, linking it to a pilgrimage but it could also be an aberattion of “rocky headlands” which describes the topography. Either way, it is a very early Christian church, probably run by monks. The shape is of an upside down boat and the interior has a corabelled roof with a single window where the altar would have been and a door in the back. There is an entry fee, but well worth the docents explanation of the history and unique construction.

Tom Crean’s South Pole Inn–is located in Annscaul and is on the pilgrimage route. Tom (1877-1938) first explored Antarctica with Scott in 1901-1904 on the Discovery expedition where he also met Shackleton, who was a team member. Later, he joined Scott’s Terra Nova Expedition (1911-1913) and this is when Scott lost his life. Tom walked 35 freezing miles alone across the Ross Ice Shelf to save a man and later received a heroic medal for that endevor. His third and final expedition was with Shackleton’s Endurance expedition (1914-1917), which became trapped in ice and sank. Again, an amazing hero, he joined Shackleton to travel 800 nautical miles in a rowboat to get help from a distant whaling station. The inn is still owned by family, and they make a latte with a cute penguin in the foam.  The inside of the pub is filled with memorabillia and newspaper articles. Tom is buried nearby in a deserted cemetary nearby–ask the barkeep how to get there.