Bhutan is a cheeky country, promoting the philosophy of Gross National Happiness. They dilligently measure this elusive emotion, standing taller than David preaching to a Golliath world that aquiring material things does not lead to joy.

Since 1971, the King and parliament base their nation’s happiness on spirituality and physical need fullfillment. For survival, humans require protection from the elements, food, and good health. Nothing greater occurs unless these basic needs are met.

Free health care and free education were giant steps in this little Asian land. Bhutan is successful at this, but the United States fails. I’m ashamed of my homeland and the political dung heap we allow to fester.

Having spiritual fullfillment is easy when 75% of Bhutan is Bhuddhist.  During my visit I saw people of all ages begining their day at the local Bhuddist Stupa, spinning prayer wheels and fingers slipping over mantra beads. Their faith is strong. Their commitment to compassion for all beings is impressive, rising with a sun hazy with curling incense smoke. Young couples believe in the power of prayer, dropping elderly parents at the temple in the morning. Their post retirement job is to beseach God for compassion

and abundance for every life. This is a serious and endless mission. 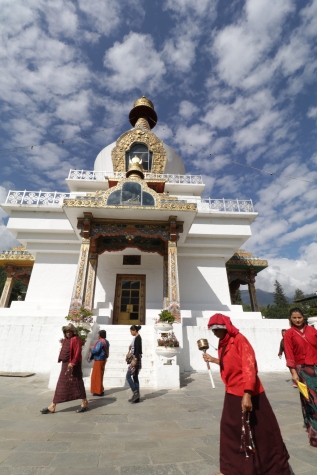 The King took another leap in 2007 by demanding a parliamentary democracy and he entered his country into the United Nations. Sandwiched like a  rare piece of prime rib between the white rice of China and India, local politics remain a high wire trapeze act without a safety net.

China already took some of the northern proviences and their request to place three highways through Bhutan to access India were quickly denied. An uneasy silence remains. Out of necessity, this tiny country with a big heart dances economically with India. Fear is expressed candidly.

“What will happen if China decides to invade us, as they did in Tibet?” Our guide held no illusions. “Will the United Nations protect us? We don’t think so, because we don’t produce anything great nations need.”  He believed that the majority of adults in Bhutan wouldn’t know the difference living under a communist China.

But this land of a dragon licking seven wishing jewels 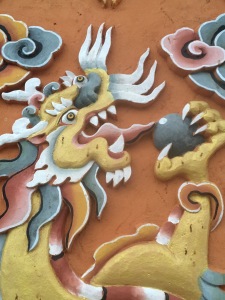 is on the cusp of change. Through education of a large young population, Bhutan is entering the twenty-first century with lightning speed. The question is: Can they keep their brightest minds living at home and not escaping abroad for higher paying jobs?

I really admire the King for addressing this issue as well. I’ve never seen a country so full of pride about their heritage or a greater love for their King and Queen. There is a national dress code for all workers. Men wear a traditional robe called a Gho and women were a dress (Kira) topped by beautiful jackets. 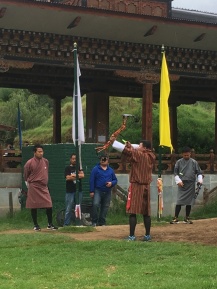 festivals have many gambling games and games of skill 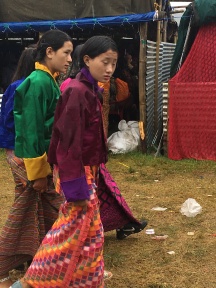 The edict intends to bolster national pride and culture. It’s working. I went to a local festival near the capital city of Thimphu in a downpour of rain that didn’t stop anyone from tromping through the mud and dressing in their finest.