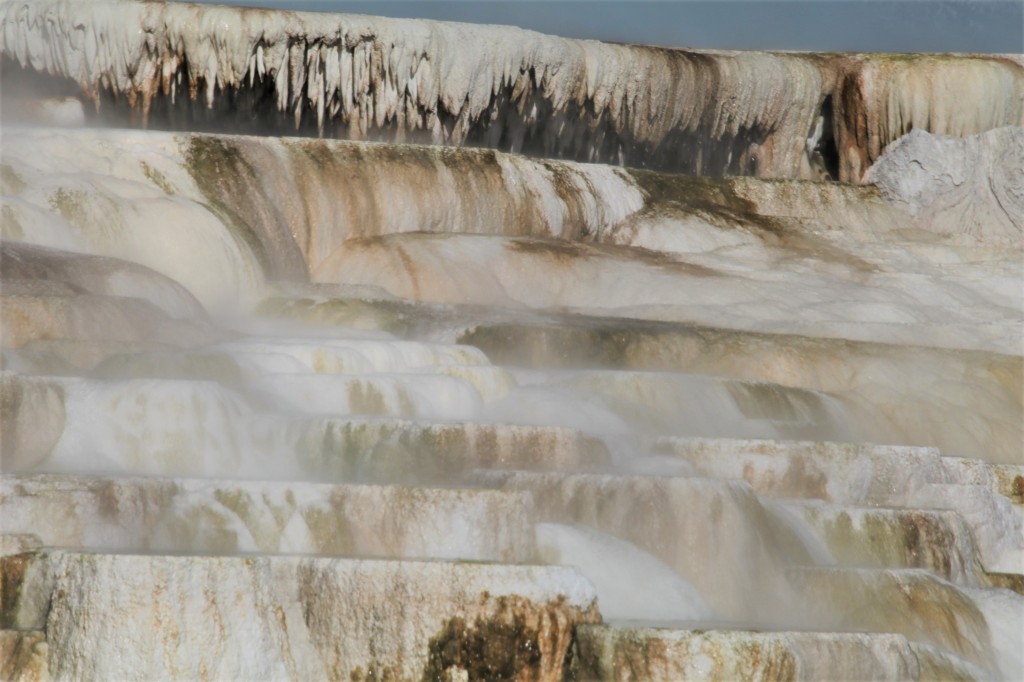 This COVID road trip takes us into the alien landscape of Yellowstone National Park. Earth has never looked so strange and beautiful.

There’s something freaky when you think about driving into the caldera of one of the largest volcanos on earth. The magma chambers have been active in Montana for over 2 million years. What makes Yellowstone extra special is the large variety of hot pools.

Thermophiles (bacteria and algae) create brilliant colored mats. Each of those colors supports life at a specific temperature range. Blue and Aquamarine are the hottest (up to 189F).

The hottest geyser’s are in the Norris Basin where trapped steam builds pressure 1,000′ below the surface. This boiling water speeds up the chamber and erupts into the air. Temperatures there are the hottest in the park ( 459F)

This primeval environment is quite toxic. Groups of bison have been found dead, indicating a quick demise downwind from gas vents that emit flammable hydrogen sulfide and carbon dioxide. Sulfuric acid burns skin and causes difficulty breathing. The animals died from a chemical asphyxiant near the Norris Geyser Basin but there’s other low lying toxic areas in the park. One remote location is called “death gulch”. Rivers and streams in the park are monitored for arsenic, lead, mercury and other heavy metals. One ranger joked that if the national park hadn’t been created, it might be a superfund site. Thankfully, most tourists experience simple water vapor and not these poisons.

Yellowstone has a diverse animal population due to the thermal environment. Buffalo wander at will. This wolf was just beyond the distance of my camera lens. We saw several fox. Trumpeter Swans flew overhead. Big eyed Elk calmly watched tourists drive by.

Nothing matches the topography and geology of the park. The Grand Canyon of the Yellowstone is breathtaking in dramatic colors and shapes created by hydrothermally altered rhyolite sediments.

Huge hoodoos dot the landscape. The river flows 1,000′ below in the sculpted gorge and steam vents are pocketed in the walls above. We tried to get to artists point for sunrise, hoping that the lower falls would be illuminated by the sun. It took me 1 1/2 hours to realize that the location of the winter sun doesn’t highlight the falls.

We loved exploring here Halloween weekend. The park isn’t usually open that late, but COVID and good weather were on our side. It wasn’t crowded although goofy things did occur. We heard about 2 men arrested for trying to cook a chicken in one of the boiling pools. They’re lucky they didn’t slip and fall in. The bodies of previous rule breakers dissolved in the acid and were never recovered.

Been a tough few weeks 8 miles of drip irrigation tube laid with valves. Pruning and fixing thousands in the ground. Then today Bob and I planted 300 new trees.
Loading Comments...
%d bloggers like this: