Bangkok was a sleepy fishing village until the early 15th century when the Ayutthaya rulers left the ransacked remains of the royal capital and resettled at the Chao Phraya River that flows to the Gulf of Thailand. 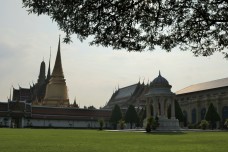 In 1782, the King of Siam began construction on the grand palace. The mighty splendor of ordination halls, temples, stupas, and phras can be seen today. 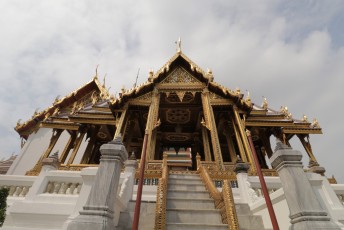 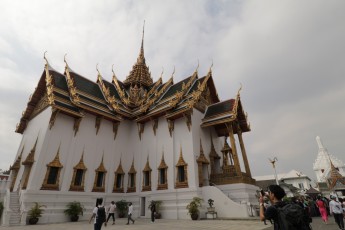 Every surface is covered in gold, glass or ceramic tiles. The 15th century Emerald Buddha (really semi-precious jasper) is the most important piece of art housed in the temple here. This icon represents the heart and soul of Thailand. There are three golden and jeweled outfits for the emerald Buddha, changed in great ceremony by the king with each season.

Outside, the temple is held up by 112 Garudas (King of birds) holding Nagas Serpents.

The surrounding gallery has murals, many coated with gold, depicting the Ramakien story about the battle between the demon Tosakanth who kidnaps the beautiful queen married to human King Rama. He unleashes a mighty monkey army in a tale younger than Helen of Troy but older than The Wizard of Oz and saves the goodly queen from rape and mayhem. Mesmerized in the art work, I got lost in the tale. 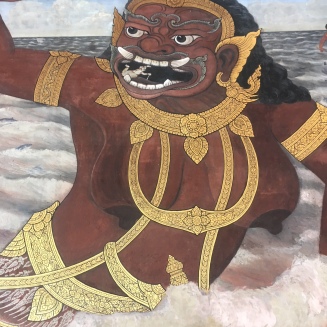 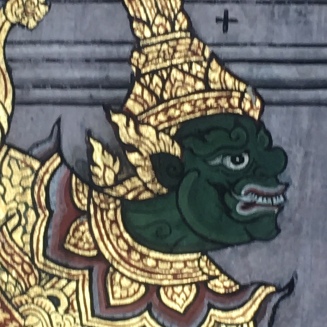 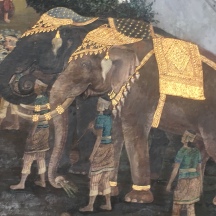 In the late 1700’s, Rama 1V ruled from this palace and became famous in the play The King and I. Governess Anne did come from England to tutor his children and harem, but sadly, everyone agrees that a love story is a gross exaggeration.

Protective demons facing the temple with the Emerald Buddha

Flash forward to WW11 and Japanese occupation, resulting in Bangkok being bombed by the allies and a post war United States presence. Later, US bases in Thailand bolstered the Vietnam War and became an R+R destination for our fighting men. With that came a flourishing sex trade and many a watering hole, especially in the red light district. 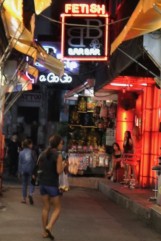 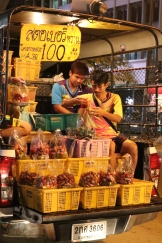 Remember the 1984 song: One night in Bangkok? It was banned in Thailand for giving the wrong image of the largely Buddhist nation.

The bars are temples

But the pearls ain’t free

You’ll find a god in every cloister

And if you’re lucky,

Then the gods a she….

Everything is for sale on the streets of Bangkok: from trivial to magnificent. From the profane to the profound. 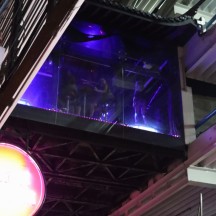 Crossing the road safely with speeding vehicles requires a blindfold or formidable courage. A green light means Indie 500. A red light does not mean stop, but a running roll, dodging pedestrians like a pin ball game. Don’t look for safety on the sidewalks. 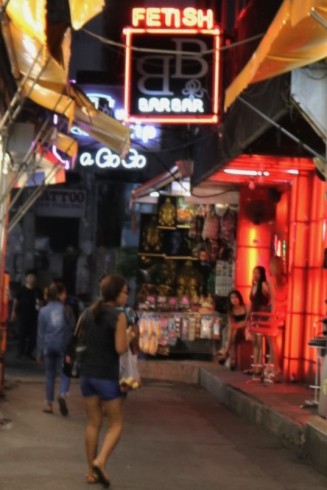 If all things that glitter are gold, Bangkok at night is priceless. Stop counting the high rise cranes and modern architecture. Concentrate on the lights. The multi-layered roof of the Banyan Tree Hotel offers 360 degree dining or a special seat in the moon bar to see the city shine. Be sure to have a credit card and a reservation! https://www.banyantree.com/en/thailand/bangkok. photo courtesy of Bonnye Frost