The most common question I receive about Bhutan (after “where?”) is a curiosity about how a typical family might live.

Mershina is a village surrounded by beautiful rice paddies and sits below a famous  fertility monastery (more on that later). Their claim to fame is anything in the shape of a penis–for example, an anatomical key chain keepsake.

I resisted the urge and didn’t buy one. Not even the pink one with wings. Although I’m progressing with tongue-in-cheek, infertile couples from around the world come here for the monk’s ceremony and blessing. There’s a book with tales of success inside the temple.

The exterior pictures of the homes in the banner belies what’s inside. We visited a 70 year-old woman who lives with her daughter, her son-in-law and their four children.

The ground floor is the barn where they keep their water buffalo, goats, and chickens.  The grand-daughter worked in a small shed,  toasting rice they harvested to sell at the market. This treat tastes like Rice Krispies without honey or sugar. 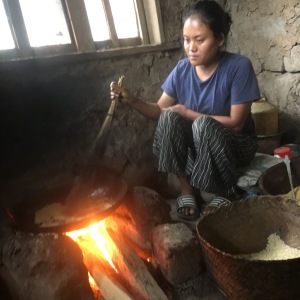 Here’s a juxtaposition: This young lady was home on a college vacation. Her right foot stands in the 21st Century and the left totters in Medieval times. She has no intention of spending a traditional life living in a small farming village.

Climbing steep wood stairs,  we entered the living room. A small color TV was on, images of the Buddhist festival in Thimphu flitted across the screen. The grandmother sat cross-legged on a mat as she invited guests to sit on her new couch. Most homes don’t have such luxurious furniture. She offered us food. Drink. Hospitality. It was an honor that we came to see her.

We proceeded to ask the family questions about life in Bhutan while the grandmother and daughter chewed doma, their lips stained red and teeth blackened by the stimulant in the nut. The grand-daughter on the left side of the photo told us (In English) that she won’t chew and become addicted like her elders. 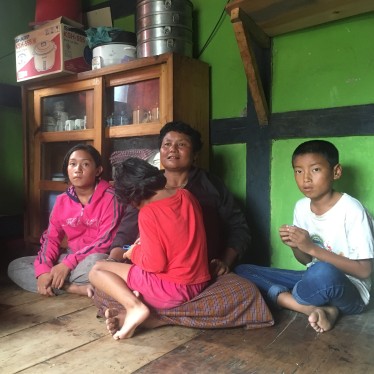 most families sit on the floor. Notice the Momo steamer on the cabinet behind them.

sleeping mats are 3-4 people in a room

The grandmother asked us a hard question. “How many hours do you have to ride a bus from here to California in the United States?” We looked at each other stymied, trying to figure out how to explain geographic distance to someone who didn’t know the world. After complex math based upon a 48 mile bus ride to Thimphu taking  3 hours, we came up with an impossible guesstimate of 21 days. Since she’d never seen an airplane, she wouldn’t grasp the concept of traveling across the globe faster. 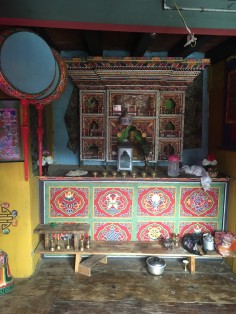 Every home has a Buddhist altar

this is a very modern kitchen for Bhutan. This family has a refrigerator and recently updated for indoor water.

After much laughter, we were invited to tour the house. The left picture above is a Buddhist altar with hanging ceremonial drums and the kitchen is quite modern with a new indoor water spigot and a refrigerator.

But a home is measured by more than “things”. A family and their happiness is something transparent. It’s a moment offered with love. It’s hidden in a smile and shared with faith. Happiness is reaching out across cultural differences and finding the common joyous denominator, even when we are so far apart.